If you haven’t played Control yet, the game’s newest release on Nintendo Switch might be enough to finally tempt you to give it a go. But one question looms large over the Switch’s version of the game: does it actually run well on Nintendo’s less-powerful home console? The short answer is: yes. The slightly longer answer is: it runs well enough. The longer answer is this review.

Developer Remedy has partnered up with Ubitus, a cloud gaming company, to release the first “Cloud Version” Switch title to launch globally (Japanese gamers have already sampled the likes of Assassin’s Creed Odyssey and Resident Evil 7 via the wonders of streaming). The fundamental difference between Control on Xbox and PlayStation and the Cloud Version on Switch is that the game is not running natively on the Switch itself; instead, it’s streamed remotely from Ubitus’ much more powerful servers. The obvious downside is that your Switch has to be connected to the internet to run the game. 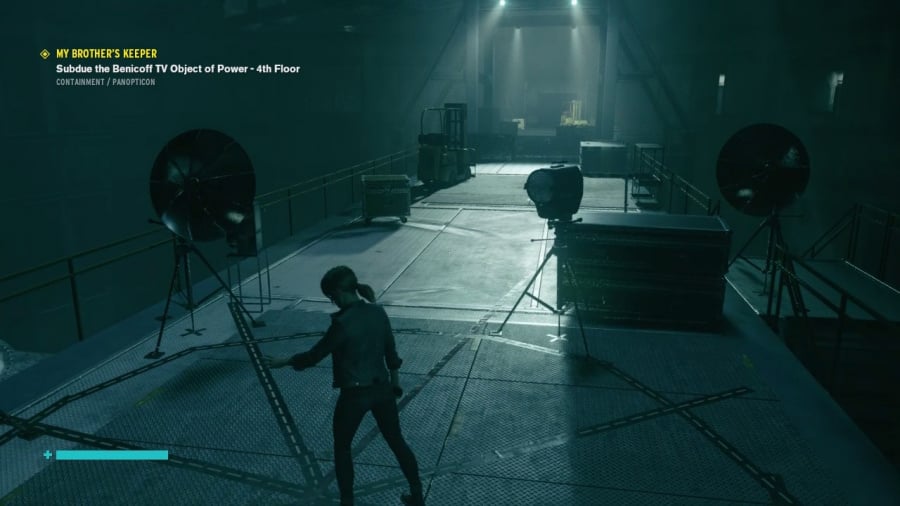 Basically, the Switch isn’t built to handle colossal, technologically taxing games, but this workaround means Switch owners will potentially be able to play them – with a small sacrifice in graphical fidelity and input latency. (Oh, and it would be remiss of us to fail to point out that, despite carrying a premium price tag, there’s the danger that you’ll lose access to Control on Switch if the servers ever get turned off in the future – an eventuality we’ll all have to get used to if cloud gaming really is the future).

For those who aren’t familiar, Control is an M.C. Escher and House of Leaves-inspired game about Jesse, a woman led to the Federal Bureau of Control as part of her search for… something. The FBC looks like any other office, to begin with – brutalist concrete walls towering over uncomfortable leather seating, and rows of desks lined up in window-lined rooms – but it soon becomes clear that there are sinister and supernatural things going on behind closed doors. Large parts of the game are squirrelled away in lore documents and FMV sequences, drawing a fair amount of inspiration from Remedy’s previous title, Alan Wake, who also gets his own DLC – but more on that later. 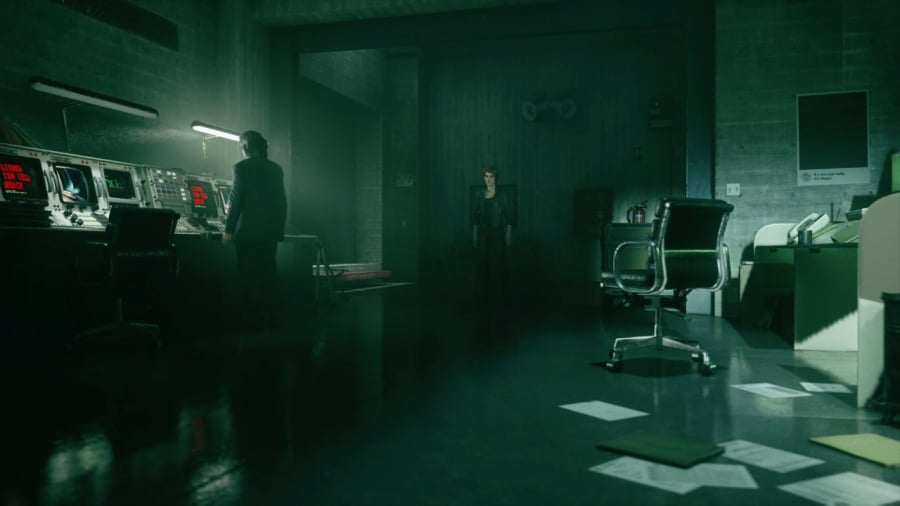 Upon starting the game, two options are laid before you: Enhanced Graphics mode – which caps the framerate at 30 but includes higher detail and raytraced lighting – and Enhanced Performance mode, which eschews the raytracing for 60 frames per second. If the game detects any internet instability, the player will be bumped down to Enhanced Performance mode for a while, allowing for a smoother experience. We should note that our experience with the game may differ to your own, depending on your connection speed and the reliability of your ISP. It’s also worth pointing out that playing the game docked with your Switch linked to your router via a wired connection is going to help keep latency at a minimum. What if your home internet setup is woefully inadequate? Worry not, there’s a short trial period during which you can establish if Control plays nicely with your broadband connection, and you only hand over the cash for the full game after this trial session has elapsed.

The game runs remarkably well, considering that it’s zooming across the internet pipes from some distant land. Input latency – perhaps the biggest worry people have about cloud gaming in general – isn’t as huge a problem as you might expect here, and there were very few times we actually felt like the game was lagging behind our button inputs, which is remarkable in itself. Still, when it comes to visuals, there are some moments where Control struggles. Enhanced Graphics mode gives players reflections and more realistic lighting, but it doesn’t really make a huge difference, since Enhanced Performance also looks pretty neat, and the raytracing actually makes things look fuzzy around the edges whenever the camera moves. When playing in handheld mode, this becomes even more pronounced, muddying the high-detail world into hazy, similar shades of grey, and the small, fiddly Joy-Con are not well-suited to the precision that the combat requires, making the game generally better suited to play on the big screen – with a Pro Controller, if possible. 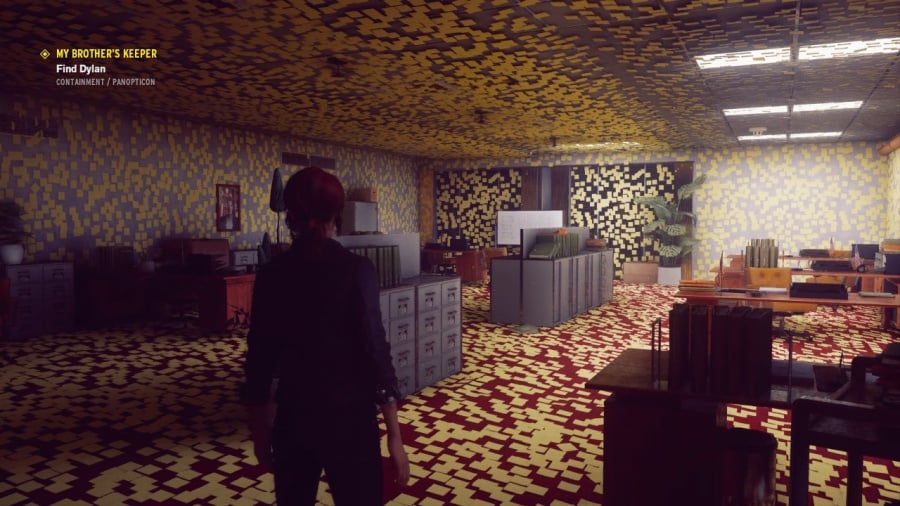 It also turns out that the colour red doesn’t handle compression very well, and if there’s one thing to know about Control, it’s that red is omnipresent. For the most part, the game handles the accents of red just fine, but some boss battles and setpieces require the entire room to be red. Add in a busy scene – particles, explosions, tons of enemies – and it ends up looking a little bit like a jar of jam that someone dropped on the floor. It’s hard to see who you should be firing at, or what’s going on, making specific moments in the game much harder than they need to be.

The difficulty in general, though, is pretty well-balanced. Control’s greatest strength is its gorgeously kinetic combat, where Jesse comes into her own. Almost everything in any room is either grabbable or destroyable, and Control makes the most of it with Jesse’s incredible telekinetic powers, hurling chunks of drywall at enemies until they explode in a satisfying puff of shimmering powder. In later levels, when Jesse’s filled out her skill tree, it’s easy to take out enemies in just one hit of a well-aimed desk chair hurtling through the air, and the game fills rooms with endlessly-spawning low-level enemies just to give you the joy of feeling powerful. 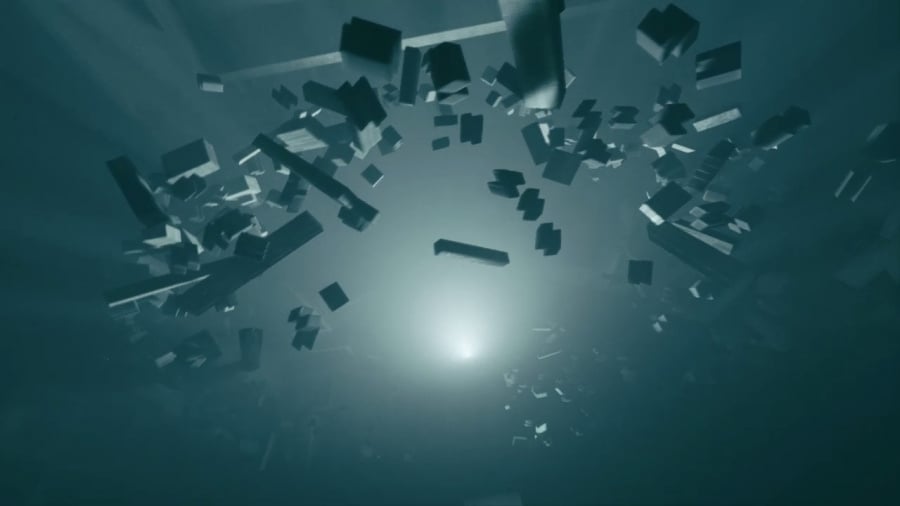 Unfortunately, the start of the game, when Jesse has nought but a rubbish gun to defend herself with, can drag a little in comparison. Control is not really a shooting game; although Jesse’s gun is a large part of her arsenal and though it makes sense from a narrative perspective to hold off on giving her powers for a couple of hours, the latter game is much more fun with all the cool things she can do under your instruction. Story-wise, too, the game can be a bit of a turn-off early on. Like Jesse, the player takes many hours to understand exactly what’s happening within the Federal Bureau of Control. Playing through those hours can occasionally feel like being at a party where everyone else knows each other, and you’re frantically trying to catch up.

Once Jesse is beefed up enough that fights become a matter of minutes to complete, the game’s first of two DLCs will open up: AWE, an Alan-Wake-themed investigation into a new shadowy enemy. Once the main game is finished, the second DLC becomes available: The Foundation, a post-game exploration of the FBC’s origin. Both DLCs and the main game updates within them bring new mechanics, new weapons, and new upgrades to existing powers, alongside general quality-of-life tweaks to the game itself.

AWE is a fun continuation of Control’s main game, although it largely relies on the player’s knowledge of Alan Wake to be truly fulfilling. But The Foundation, which deals with a new threat to the Bureau, feels like a strange misstep. Despite its compelling story hook, The Foundation is difficult to navigate and even harder to figure out, with minimal signposting and a confusing map. It’s much more of a slog than the main game, and even its new crystal-themed Create and Fracture abilities fall flat next to Jesse’s existing powers. 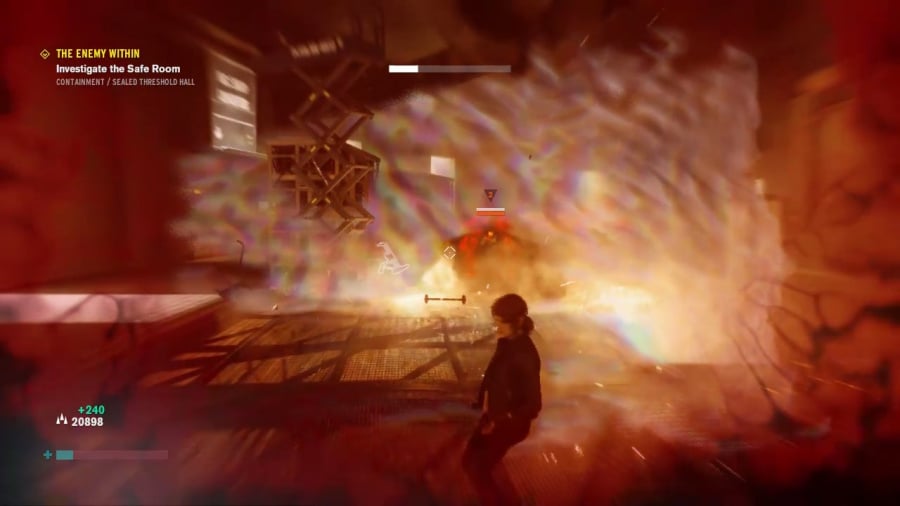 All in all, Control is almost as fantastic on Switch as it is on any other console, and although it has occasional framerate drops and the odd bit of compression here and there, it’s a feat in itself that it can be played on Nintendo’s home console. For anyone who has a Switch as their main (or preferred) method of playing games, it’s a no-brainer, especially with the addition of a Pro Controller, but – as you might expect – other consoles and PC are better up to the task of running the game, if you have them. If this is the first step to many other high-powered games on the Switch, though, it’s a bloody good one.

Control is, and always has been, a fantastic game – that’s not in doubt. Remedy’s skill when it comes to creating a highly-detailed game-world is world-class, and the gloriously dynamic combat is second-to-none – once you’ve unlocked the required skills in-game, at least. The Nintendo Switch may not be the absolute best place to play Control if you’re looking for crisp 60fps graphics and rock-solid performance, but it’s perfectly good if you’ve got a relatively stable internet connection and a Pro Controller.