Those of you with very good memories might recall the UK studio Nyamyam, which was responsible for the gorgeous Tengami on Wii U. Fronted by former Rare developers Jennifer Schneidereit (Kinect Sports) and Phil Tossell (Star Fox Adventures), Nyamyam created a game engine which simulated to the look of classic pop-up picture books, and in 2019, used this innovative engine to create the ambitious Astrologaster on iOS, a “comic narrative adventure” based on the real-life physician and astrologer Simon Forman, who must use his knowledge of the stars to help the various characters he meets.

Since its release, Astrologaster has been showered with industry awards and nominations, including “Excellence in Audio” (22nd Annual IGF Awards) and “Best Music for an Indie Game” (18th Annual G.A.N.G. Awards), amongst others.

We’re happy to announce that, following the game’s release on Windows and Mac, Astrologaster is coming to the Nintendo Switch on February 18th, and pre-orders go live on the eShop today. We were also lucky enough to sit down with Schneidereit, the game’s Creative Director, to talk about its origins, development and what it was like bringing it to Switch.

Nintendo Life: We’ve read that inspiration for Astrologaster came after seeing a research lecture on the casebooks of Simon Forman. What was it about this man and his patients that excited your creativity?

Jennifer Schneidereit: Forman’s casebooks seemed to me as a window into the lives of people from 400 years ago – ordinary people like you and I, people who are rarely mentioned in history books. Forman’s biography is quite peculiar; for example, one of the first stories I heard about him was that he was arrested for having had (ahem) “relations” on a man’s grave with his widow. How bizarre is that?

Forman’s biography is full of these weird little stories. That, and the fact that Elizabethan diseases and medicine are hilarious sealed the deal for me. What is not to love about diseases called “Dropping down of the p***” (incontinence), “Knobs on the yard” (genital warts) or “The green sickness” (sexual frustration suffered by women)?

Astrologaster is based on historical accounts and records — can you tell us a little about the process of going through those stories and how you chose elements to adapt and embellish in your narrative?

First off, the astronomical records for the times and days used to perform the readings are real. For example, if a client arrives on November 2nd, 1595 at 10:15 am, then the astrological chart in the game uses the exact planetary positions as they would have been over London at that time and date.

Second, all diseases and medical treatments (with the exception of two) are real. For example “stroking the hand of a corpse against your throat” was considered to be a cure for tonsillitis (AKA quinsy). And, if you were a man with bleeding haemorrhoids, you had nothing to worry about – according to medical science at the time, it was considered to be the male period (menstruation) and therefore perfectly healthy.

We were very fortunate to work closely with the University of Cambridge, mainly Dr. Lauren Kassell, whose team are the experts on Forman’s casebooks and Elizabethan medicine. We heavily leaned on Lauren to point us to exciting and unique cases and famous clients, as well as giving us an idea of the more common problems and questions that clients came to Forman with. We used this selection, as well as our own research, as the basis for the narrative. Half of the clients in the game are real historic figures and most of them can be found in his casebook – for example, Emilia Lanier, John Whitgift (Archbishop of Canterbury) or Avis Allen. In the game, each client has a full storyline and comes back to Forman between 5 and 7 times. In reality, most clients just came to see Forman once or twice.

We stuck as closely as we could to Forman’s real story, the real stories of his patients, and the true history of medicine. We mined this material for comedic elements, then dressed them up. We were also careful to find and include elements of genuine pain and tragedy: having people feel something for the characters lends something meaningful to the comedy – especially when dealing with an anti-hero protagonist like Forman.

Another part of our approach – which is a fairly typical approach in historical comedy – was to link the problems and issues for these characters to present-day concerns. Obviously, at the time of development, we didn’t know the COVID pandemic was coming, but it’s a striking coincidence: our game begins in the middle of London’s 1592 plague. Players can look forward to discovering Simon Forman’s ‘One Weird Trick’ for curing the plague.

How did you set about integrating astrology as a gameplay mechanic? We imagine it involved plenty of research!

The astrology aspect underwent a lot of research and iteration. There were a lot of challenges in figuring it out, especially when I turned to Forman’s own writing about his method. In the end, YouTube, with its many astrology tutorials, came to the rescue. I ended up designing a simplified model of astrology for the game: reducing it to a language in which stars and planets provide a vocabulary for the reading, and where houses provide the topics and themes this vocabulary pertains to. By combining any number of planets and houses, one can create multi-faceted and complex stories.

Players do not have to know astrology to play the game. Forman acts as a translator of the stars and the player guides Forman in his choices.

How long was Astrologaster in development? Did it change much over time from the original idea?

The game was in full production for two years and in concept, pre-production and financing for three. We stuck pretty closely to the original idea of making a “best of” comedy game of Forman’s casebooks, but obviously iterated a lot on the concept’s execution.

We were fans of Tengami on Wii U, and the pop-up book presentation here reminds us of that game (although the comic tone is very different). Are there any other ways in which Tengami informed or influenced Astrologaster?

Not really. We wanted to re-use the technology and felt that it was a great fit to bring Forman’s casebooks alive.

The game released on iOS and PC in 2019 – was there always a plan to bring it to Switch? Why now?

Yes, we always wanted to bring it to Switch, but being a very small team didn’t feel confident in doing a simultaneous launch. iOS and PC were easier platforms to launch on. We started to make preparations for the Switch version at the end of 2019 by partnering with publisher Plug-In Digital. The original plan was to launch in mid-2020, but then COVID happened and slowed everything down on our end, which brings us to February 18th, 2021 as the launch date.

How did you find adapting the game Nintendo’s console? Will it play any differently to the other versions or have any platform-specific features?

Adapting Astrologaster to the Switch was mostly straightforward, especially with our experience bringing Tengami on the Wii U. One thing that we regretted not doing for Tengami on the Wii U was controller support. So this time around with Astrologaster, we spent a lot of time implementing full controller support. Astrologaster was created with the intention to capture what a “game sitcom” could be like, and I think the Switch version will get that “sitcom” element across the best with people being able to play on the TV with the controller while sitting on the sofa with a partner or friends; it will really bring that “sitcom” feel alive.

Can you tell us a little about the songs and music in the game? Each of the characters has their own theme, is that right?

Each character in the game has a song, called a madrigal. They are like the Renaissance equivalent of modern-day pop music. Before a consultation, a specific verse of that character’s madrigal is played. The songs are not only very funny, they also serve as a reminder of what has happened in a patient’s storyline so far, expose a patient’s personality, and sometimes also foreshadow events.

They were crafted in close cooperation between writer and lyricist Katharine Neil and composer Andrea Boccadoro and we recorded them in London, at Air-Edel studio, with an amazing cast of singers. It was one of the project highlights for me. 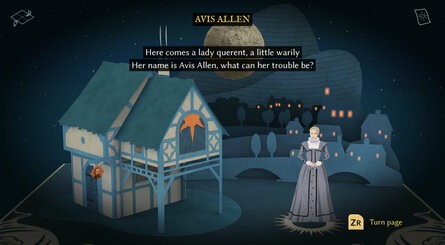 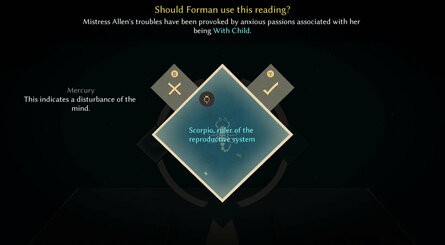 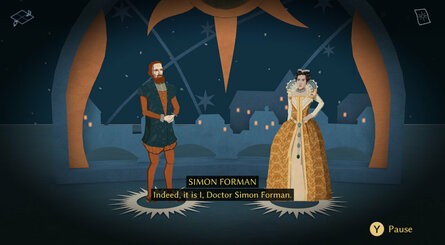 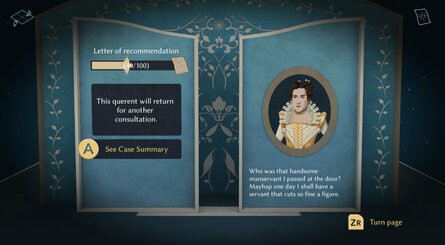 Having gone on an astrological deep-dive in the name of narrative entertainment, why do you think astrology continues to capture people’s imaginations to this day?

Astrology has a long rich history. Like many good games, astrology is a system that’s easy to learn but hard to master, which makes it fun and deep. Having spent time digging into it for Astrologaster, I can see why people use astrology as a tool for self-analysis, storytelling (like we did!) and memes.

As we’ve seen over the last year, scientific reality can be depressing. Whereas astrology can be fun, imaginative and hopeful.

What is the team at Nyamyam working on next? Can Nintendo fans look forward to seeing more from the studio in the future?

With our next game, we will moving on from scientific history (i.e. Astrologaster) towards science fiction. We are big sci-fi fans.

Nintendo fans can absolutely expect to see more games from us. We are actually talking about the next game being a console-first release.

We’d like to thank Jennifer for taking the time to speak with us. Astrologaster launches on Switch on February 18th, and you can pre-order it on the eShop today.