If you’re a fan of great big robots mercilessly smashing each other’s massive metal heads in – and let’s face it, who isn’t? – then RocketPunch Games’ superbly stylish 2D side-scroller Hardcore Mecha would like a very loud word. This is an absurdly overwrought anime adventure spread across a solid seven-hour campaign which sees you strap in for some hot mech-on-mech action as you blast across space with a motley crew of mercs on a dangerous contract to rescue a missing intelligence officer. Do you like Cybernator on the SNES? Imagine that turned up to eleven and you’re almost there.

From the get-go, Hardcore Mecha fully embraces its overblown anime influences, telling a ludicrously OTT tale that’s full of twists and turns, cheesy dialogue, guitar riffs, death, drama and multiple epic face-offs between main protagonist Tarethur O’Connell and his newly-found nemesis Vulphaes Bonaparte. What starts out as a relatively simple rescue mission to Mars for our colourful cast of rebel scum soon escalates into a full-scale Gundam-style war between the New United Nations and a mysterious terrorist cell known as Steel Dawn. 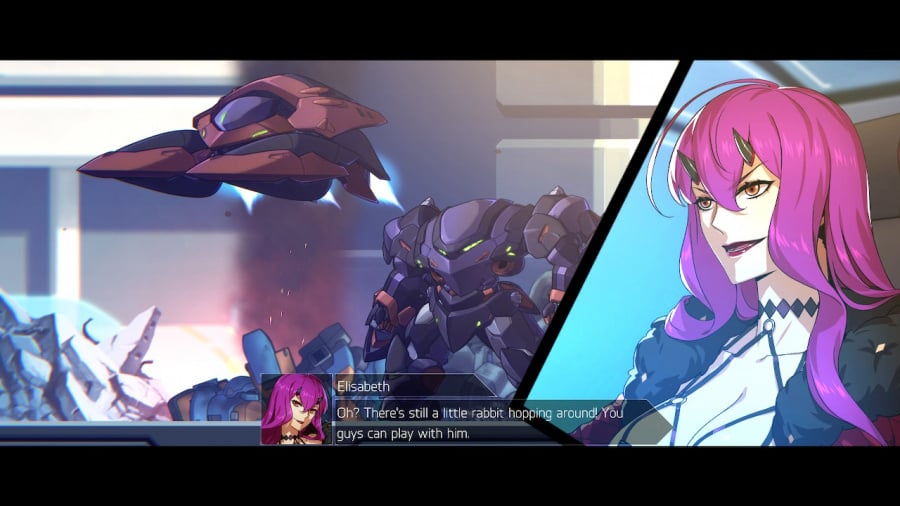 There’s no shortage of shadowy villains, vengeful protagonists, plot twists or unexpected tragedy with this one, and we were pleasantly surprised by just how much story has been crammed in here. This is an unexpectedly meaty tale populated by hugely likeable characters and more than enough high-octane cyborg slapping to keep you properly hooked over its running time.

Hardcore Mecha’s action-packed gameplay takes place over an impressively varied and wonderfully detailed selection of locales that see you strap into your mighty mech and battle hordes of robot foes on the hostile red surface of Mars, through bright and sunny futuristic cities, labyrinthian enemy lairs, deep under the ocean and across the vacuum of space itself. There are tricky platforming sections to navigate, zero gravity elements, stealth levels which see you abandon your mech for some sneaky on-foot sabotage and even a side-scrolling space battle that hands you control of a massive frigate as it punches its way through Steel Dawn’s intergalactic forces. 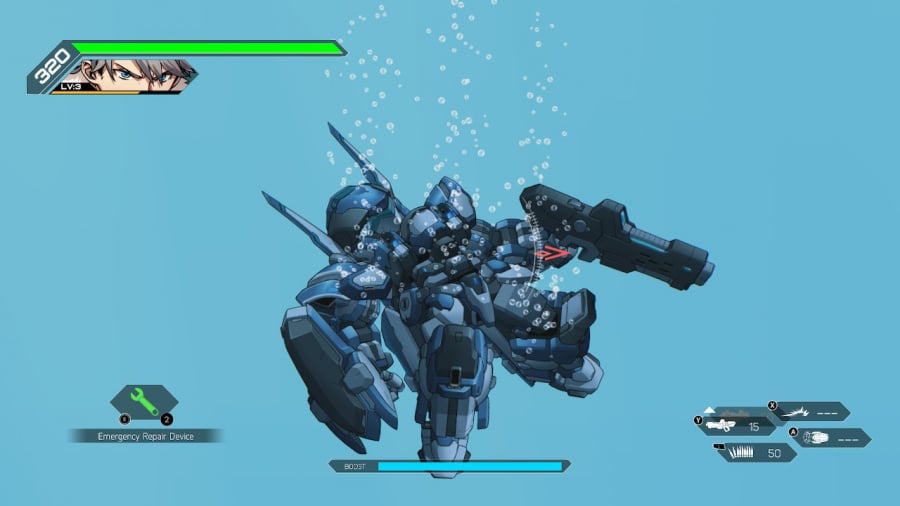 In terms of the actual mech combat on offer, there’s also a surprising level of depth and variety to proceedings, with the game’s intense robot action backed up by RPG mechanics that see you unlock a steady stream of new weapons, suit upgrades, support mods, gadgets, melee moves and a handful of screen-shattering ultimate attacks that charge up as you fight and can then be activated in order to cause critical damage to anyone dumb enough to get in the way.

You can also pick up any defeated enemy’s guns during battle, a smart little gameplay wrinkle that gives you access to absolutely loads of superbly high-powered weaponry on the fly, something that really helps to add a ton of spice to the moment-to-moment action. Mechs feel satisfyingly heavy and involving to command, too, although it does take a little bit of time to find your feet and get a handle on the basic rhythm of battle, your offensive options and the speed at which you move around arenas – something that’s facilitated by early levels which take it relatively easy on players, easing you in before really cranking up the heat. 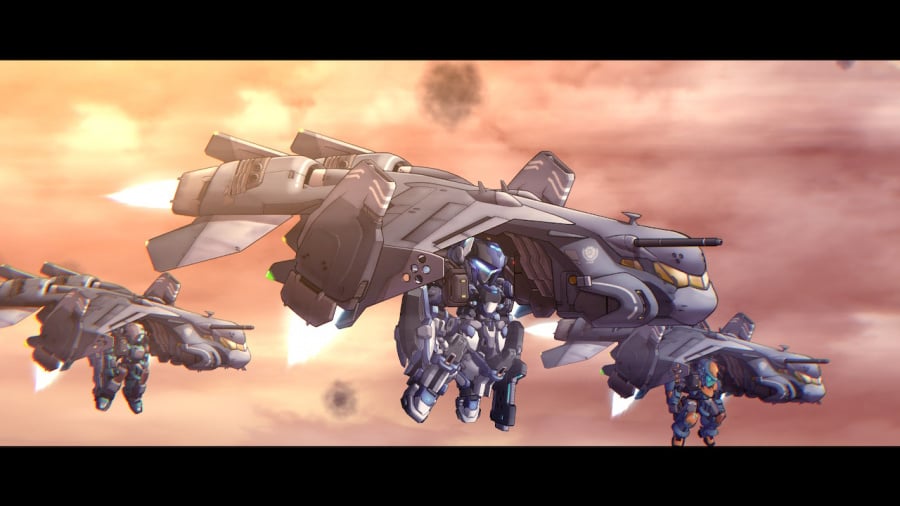 Getting a proper grip on the combat requires you to master boosting in tandem with your mech’s ability to hover in order to zip up and around levels to dodge incoming damage, holding ZR at any point to lock your position in the air and using the right stick to aim your weapons and attack from an advantageous position. You can dodge and boost on the ground, dish out devastating CQC combos via the X button and block by holding in ZL for a temporary shield that can soak up massive amounts of incoming damage.

There’s plenty of variety in the foes you’ll face too, with rank and file enemy mechs easily despatched while heavier shielded forces wielding massive weapons require forward planning, quick manoeuvring and clever use of anti-mech mines, deployable turrets, smart missiles and any other gadgets you can get your hands on if you’re to emerge victorious. Fighting really is all about timing, both in terms of your movement around arenas and when taking into consideration the cooldown timings of each of your weapons, your melee attacks, shield defences and that all-important boost function.

Boss battles in Hardcore Mecha are also uniformly well-designed fare. You’ll come up against your nemesis Vulphaes Bonaparte in several ridiculously OTT sequences over the course of the story, and these central setpieces are complemented by a handful of other boss encounters that see you face off against some ludicrously large enemy death machines. These are nicely-balanced fights, too; a couple of them saw us take a good few poundings before we had a read on our enemy’s entire move set, but overall, there’s nothing that’ll stall your progress for a frustratingly long period of time. 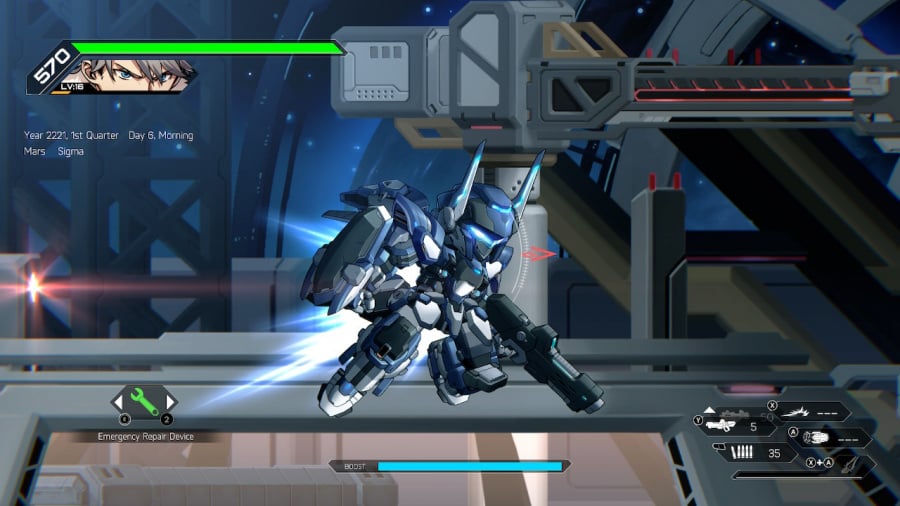 Each of the eighteen missions that make up the game’s main campaign are scored and you’ll need to charge through chapters whilst taking absolutely minimal damage if you want to earn yourself an illustrious S-rank, something that’s far from straightforward given the scale of some of the battles here. Adding further to the replayability factor, there’s a wave-based survival mode unlocked when you complete the game’s main campaign which allows you to slowly unlock and pilot any one of the many awesome mechs from the story mode, and gives you a ton of bits and bobs to upgrade and add to each and every one of them to keep you coming back for more. There’s also a PvP online mode and up to four-player local multiplayer battles which we, unfortunately, haven’t had the chance to sample yet as the online aspect of things has yet to be activated pre-launch.

Overall, Hardcore Mecha really is an impressive package. This is some of the best mech action we’ve sampled in a very long time and it all looks and sounds stunning, with lots of variety in mech and level design and some fantastically OTT sequences woven into proceedings. However, unfortunately, there is a slight spanner in the works here in the form of some persistent stuttering during hectic battles that can see things turn into a bit of a slideshow from time to time on Switch. It’s not something that affects too many parts of the game, but when it does rear its head, it’s pretty noticeable and can make it quite tough to manoeuvre out of harm’s way during more intense sequences. 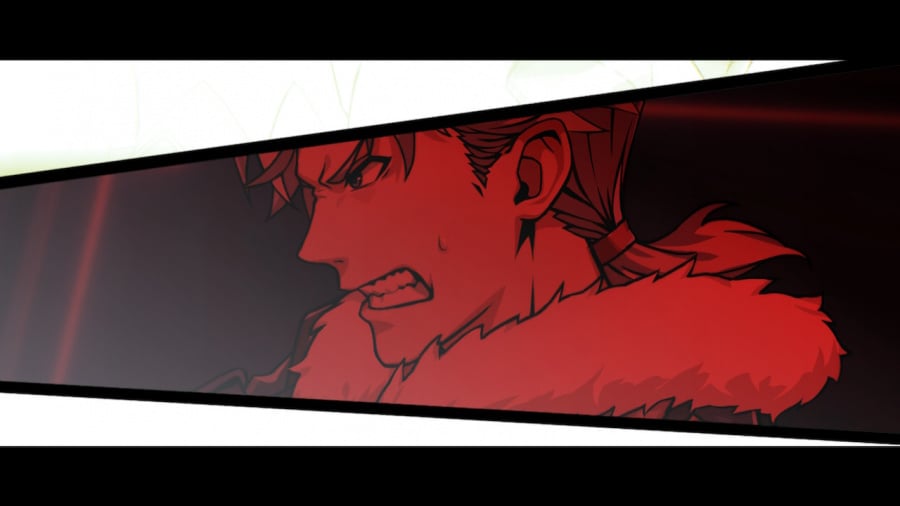 We’re really hoping RocketPunch Games has a patch incoming that’ll sort this issue out because what’s here is a genuine delight to blast through; a brilliant combination of knowingly overwrought anime narrative elements and explosive mech action that truly deserves a Switch port that does it proper justice. For now, though, we’re still happy to recommend mech fans jump in as, for us, the stuttering doesn’t detract enormously from the fun overall, just be forewarned that things do get a little janky from time to time in heated battles.

Hardcore Mecha is a superb 2D side-scrolling adventure that marries some spectacularly OTT anime storytelling with explosively satisfying robot combat. There’s a surprisingly meaty story here set across eighteen wonderfully varied levels with plenty of depth to RPG elements allowing you to customise your mech’s attack and defence capabilities. An unlockable survival mode, online PvP, local multiplayer and mission rankings also add plenty of replayability to proceedings. It’s a shame that this Switch port has some framerate issues that can see intense battles stutter, however, if RocketPunch can rectify this with a patch pretty sharpish you can feel free to add a point or two to the score below.