After the complete and utter disaster that was Mafia II: Definitive Edition, the only way was up for its prequel. Mafia: Definitive Edition is a remake of the 2002 original, bringing back the classic tale of Tommy Angelo and his descent into the world of organised crime within the US city of Lost Heaven. And 18 years later, there are many ways in which it does hold up and a few that prove it doesn’t. Die-hard fans of the source text are sure to get a kick out of proceedings, but newcomers may see some of its commitments to realism as a stumbling block. It’s still a pretty good game when all is said and done though.

If anything, Hangar 13 should be praised for developing such an impressively faithful remake. Every cutscene has been painstakingly recreated for the modern era to make the narrative shine while supporting characters, such as Tommy’s love interest, have been expanded upon to provide more depth. The iconic race is back and better than ever, and yes, the traditionally frustrating mission just before it is much more manageable this time around. That along with a whole host of other memorable sequences will make series fanatics feel right at home. This is absolutely the Mafia you remember. There’s no better proof of that than the story itself. It’s a deliberately slow burn that really lets you embed yourself inside the world of the protagonist as well as the mobsters he considers friends. The dynamic duo of Paulie and Sam become your best buddies before too long while Don Salieri instantly demands a level of respect. Working in tandem, the illegal workforce pepper their odd jobs with attempts to get one over the rival Morello family.

You could probably say that not a lot actually happens during the plot then, but it’s the work of quality voice acting that gives the impression of an epic rather than a short story. It all comes together wonderfully, really giving you the chance to both walk the walk and talk the talk as Tommy Angelo. With fantastic characters by his side, you feel like there’s nothing he couldn’t get away with.

That’s a great thing for him then because the sort of crimes you will be committing would surely result in a life sentence. The general gameplay loop only ever revolves around driving and shooting, with a quick bit of stealth here and there, but it’s the mission variety that elevates it beyond those derogatory terms. From a shoot out inside a church and planting a bomb in a hotel through to sniping a politician from the top of a prison guard tower, there’s enough here to keep things fresh. If only the controls could match that to allow for some creativity. Some very clunky inputs can make getting about in Mafia: Definitive Edition a chore as movement speed takes a nose dive the more you wrestle with it. Tommy controls like a tank at even the best of times, and unfortunately, this also extends to the shooting. An inaccurate aiming reticule is almost always to blame for misplaced shots, but even just getting it to correctly line up with an enemy’s head can be a mission and a half. These mechanics have been borrowed from Mafia III, but even they feel outdated four years later.

However, that’s just a drop in the ocean compared to the woeful vehicle handling. Look, we understand that Hangar 13 was attempting to replicate the cars of the time, but there also comes a point where you need to create an experience that’s enjoyable to play. Mafia: Definitive Edition does the former and completely forgets about the latter. Turning circles were apparently hardly a thing back in the 1930s as automobiles crash into one another more often than a Formula 1 driver. Handling is incredibly stiff, making journeys between missions and any exploration of the city harder than it should be. 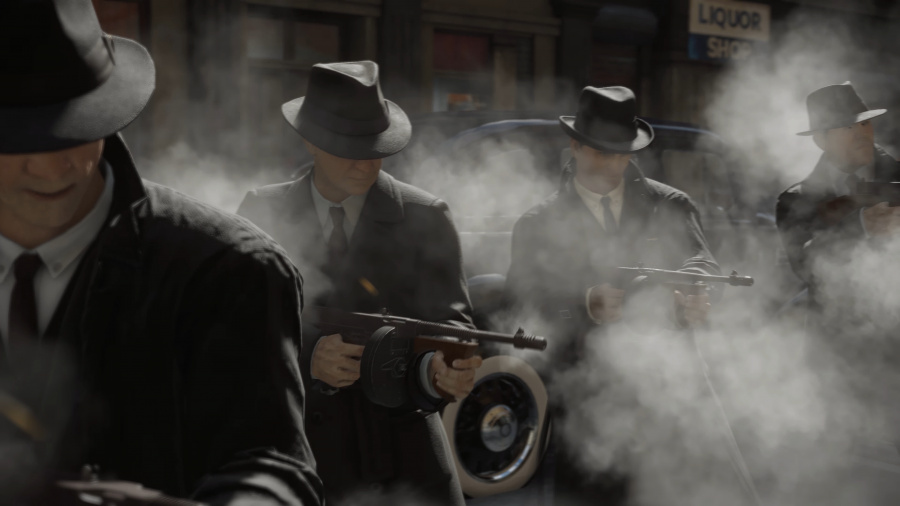 The remake has also made some small changes to Lost Heaven, but they’re purely an option that can be selected at the beginning of a 15-hour playthrough. The police force isn’t nearly as aggressive once they give chase, a number of different collectibles can be found in each and every corner to flesh out the world, and new difficulty modes let you fine-tune the experience. Again, though, they’re simply offered as a choice rather than the new way to play the game.

And as for the visuals, they can be both impressive and inadequate at the same time. Character models, particularly in cutscenes, look outstanding and so too do some environments, but introduce some greenery on the outskirts of the city and texture pop-in can be replicated on demand. Although, considering we’re working with a city layout nearly two decades old, it can be forgiven to a point. Bugs and glitches can’t be though as cars find themselves suspended in mid-air the moment you turn your back while the frame rate drops dramatically during intense combat sections.

You’ll be hard-pressed to find a remake more faithful than Mafia: Definitive Edition. It pays a great deal of respect to the source text with excellent cutscene direction, voice acting, and a cast of characters you can’t help but fall in love with. The game definitely shows its age with frustrating controls and vehicle handling, but the next story beat is enough of an excuse to continue pressing forward. Mafia: Definitive Edition’s narrative and everything that comes with it holds up to this day, and it’s one worth revisiting even if you know it like the back of your hand.