It’s funny to think about how most RPGs absurdly handle the concept of ‘Experience’. Your hero’s quest is to fight the almighty dragon/dark lord/god at the end of the game, and usually, the game has your hero become strong enough to achieve that end by having them kill hundreds, if not thousands, of worthless mook enemies. That random band of giant crabs you come across in the woods? Better kill them all just so you can ‘learn’ how to fight better.

At the time that Moon released, pretty much every RPG in existence unquestioningly followed this trend, but Moon stuck out from the pack by weirdly billing itself as an “Anti-RPG”. And what a weird journey it is. Moon undoubtedly shows its age with some of its design and presentation choices, but the overall experience is definitely worth a look, especially for those who enjoyed Undertale.

Moon’s story begins as something of a meta-game, in which you play as a young boy playing an RPG clearly based heavily on Dragon Quest. After he’s told to go to bed by his mum, the boy turns the game off, but it immediately turns itself back on and draws him in, transporting him into the land of Love-De-Gard. Here, the hero of the RPG roams the land in an ongoing quest to level up, and he achieves this by killing random animals he finds and leaving their corpses to rot. The boy is shaken by this, but he’s soon visited by the Queen of the Moon and charged with the sole responsibility of retrieving these animals’ souls and thus spreading ‘Love’ across the land. 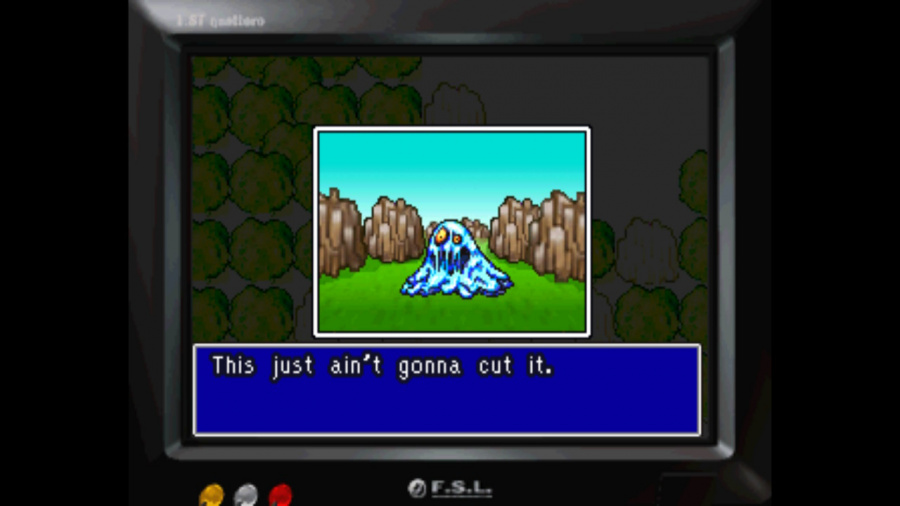 To say that the narrative of Moon is odd is quite the understatement; this is the sort of game that just becomes more deliciously unhinged the further in you go. A big part of this draw is the self-satirical bent of the writing, which frequently pokes fun at instituted JRPG conventions. For example, if you visit the town baker and try to enter his home – as you would do in thousands of other RPGs – he gets upset at you for being so rude and creepy and quite rightly throws you out. Goofy moments like this are then contrasted against abrupt instances of dark incidents, like when the boy watches the hero torch a quivering and clearly frightened slime with magic lightning. It’s a strange but effective balance between the two tones, and Moon strikes that balance well, making for a consistently enjoyable story from start to finish.

Though it’s designed as a satirical mockery of RPGs, Moon’s gameplay itself scarcely resembles that of an RPG. Instead, it’s really more like a point-and-click adventure. The world of Love-De-Gard operates on a set schedule that calls to mind the time-limited design of Zelda: Majora’s Mask, and you have to plan each day of your week around the events that you want to achieve that way. Your boy has a stamina meter that governs how long he can be awake, and if it happens to drop to zero before he can get back to a bed, the boy collapses and it’s a game over. So, each day is ultimately a matter of hedging your bets on how much you think you can do with your limited time. 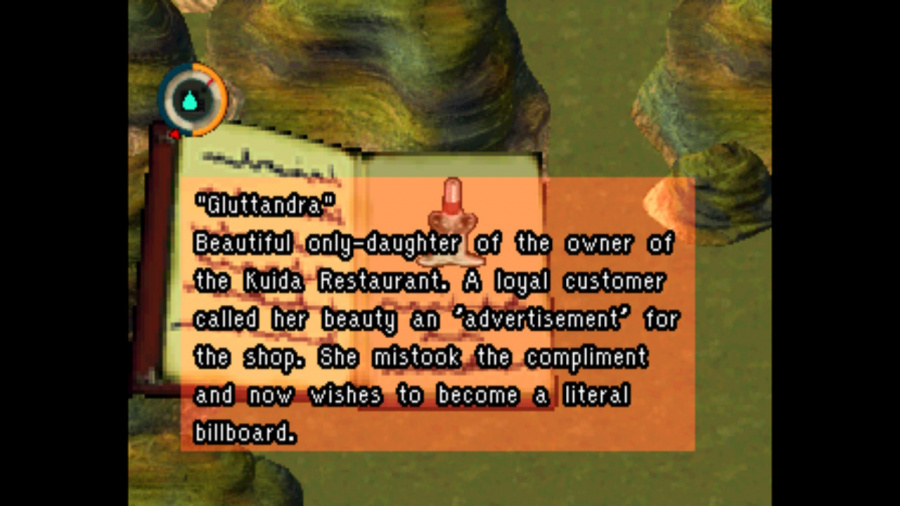 Talking to NPCs and interacting with the world often yields items that can be used for fetch quests and the like, and your ultimate task is to restore the souls of the various things that the hero kills. Upon approaching each of the fallen, you can check up on a brief log that summarizes the name of the creature along with a brief paragraph on its habits and mannerisms, which offer some vague insight into where and how you can find the creature’s soul roaming around. Once you fulfil whatever the condition is, a UFO (Unidentified Flying Octopus) will arrive and whisk away the newly resuscitated creature, while leaving you a thank-you bag of goodies to help in your journey. After doing this enough times, the boy will have accrued enough love to strengthen his resolve and this extends his daily stamina meter by a little bit more.

It’s an easy enough gameplay loop to grab once you get the hang of it, but this is also part of where Moon shows its age. The main issue being that Moon doesn’t do enough to explain even basic mechanics to the player, and this can lead to many frustrating moments where you either wander aimlessly or are outright punished for not knowing something. Case in point: the stamina system isn’t described to you at all in-game, which led to us losing all progress we made on the first day when the boy suddenly keeled over mid-step with no explanation. The localization team helpfully included the translated version of the game’s manual over on their Twitter feed, and a read-through of that certainly helps to better grasp some of the weirder aspects of Moon, but the fact remains that Moon can be a punishingly obtuse experience in many places. 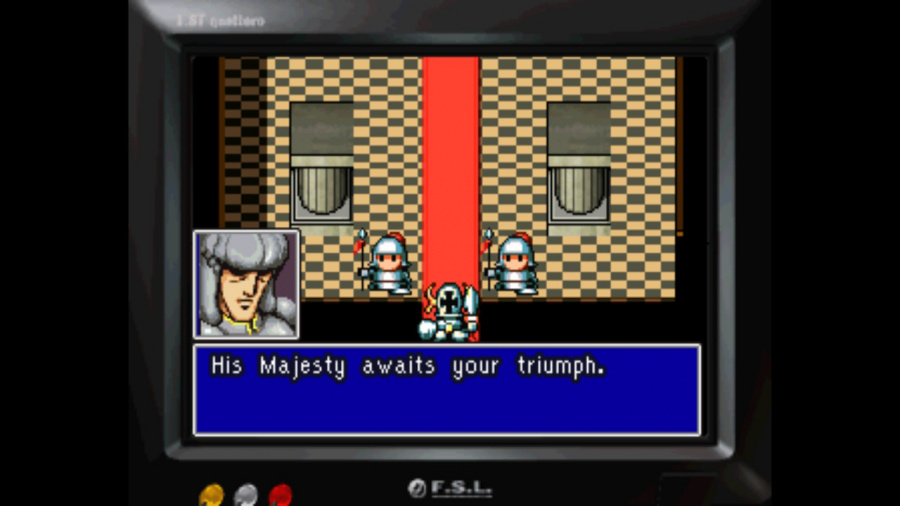 Then there’s the overall plodding pace of Moon to consider, which serves as an irritant that never quite goes away. Elements such as the boy’s relatively slow walking speed and the glacial rate at which text moves prove to artificially extend the length of this (relatively) short game. You may wake up on a day and know exactly who you need to talk to and what you need to do, but there’s plenty of moments of dead air that are spent just watching your character walk across fields and mashing through lines of dialogue boxes that take their sweet time spelling out every letter. That former example is helped somewhat by the inclusion of a fast travel system later on, but there’s still an underlying sense that Moon is a much longer game than it needs to be. Your mileage may vary on this front, of course, but if you consider yourself someone who likes a game that gets to the point and cuts out the fluff, Moon most certainly is not your cup of tea.

From a presentation perspective, Moon borrows from many other 32-bit PlayStation games in how it overlays sprites over pre-rendered backgrounds, and this release does nothing to bump up the resolution or otherwise improve on the antiquated graphics. None of it looks outright bad, although it takes a bit of time to adjust to the different form of visual presentation here. Luckily, Moon is greatly helped by the kind of art style it employs, which comes off as a blend of impressionist paintings and Claymation, of all things, which can lead to plenty of scenes that prove to be quite visually captivating. There’s no mistaking this for a late ’90s title, then, but Moon does enough right that it’s not too hard on the eyes.

Whether or not Moon is for you ultimately depends upon your tolerance level for aspects of late ’90s game design and your overall interest in the RPG genre. As a standalone product, Moon has plenty of amusing commentary about RPGs, but much of this is likely to be lost on those who don’t much care for them. Strip away the satire, and you’re left with a mostly entertaining but somewhat simplistic point-and-click-style adventure laden with fetch quests. We’d give Moon a recommendation to those who are fascinated by its legendary status as a niche classic or to those who really enjoyed the narrative style of Undertale, but if you don’t fit into either of those groups, this might not be for you.