The Last Blade is a fighting game series set in Japan’s Bakumatsu era, a mid-nineteenth century period significant for the opening of Japan to western trade, investment and influence. It’s all a bit historical, but the distinct motifs of the era are what make The Last Blade so aesthetically interesting.

First appearing in arcades in 1997, The Last Blade is more a spiritual successor to Samurai Shodown than an evolution, since both games have unique mechanical strengths. Shodown’s careful, measured play is heavier than Last Blade’s, which, while also featuring strategic elements based around devastating big weapon blows, is all-round lighter and faster. With two play style options, Speed Mode and Power Mode, the player can shape their preferred character around quicker combo driven play or a stronger, more defensive approach.

The Neo Geo Pocket, if you were an arcade kid in 1998, was a short-lived godsend. Discontinued within three years, it aped the hardcore profile of the Neo Geo home console to a fault, in that it was both niche as hell and sadly very exclusive. SNK proved while the console was still in its initial monochrome build that they had engineered a system that could faithfully recreate the arcade fighting game experience in the palm of your hand. Anyone who wrote it off on the basis of its cutesy renderings was missing a trick: the Neo Geo’s signature arcade action had been squeezed down, neatly trimmed, and given new life in the portable plane. 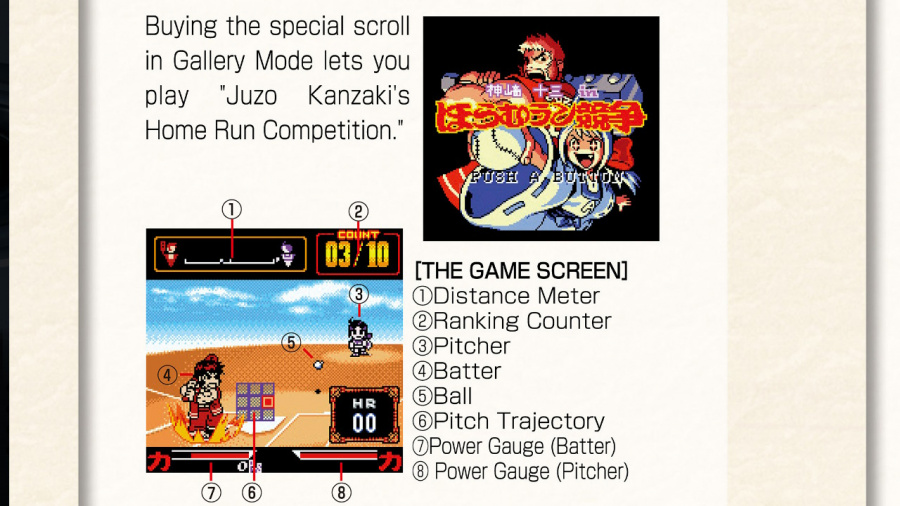 The Last Blade: Beyond the Destiny was fairly belated when it made its Neo Geo Pocket debut in 2001, shortly before SNK filed for bankruptcy. Its European release was subject to a recall when the company ceased all foreign operations a month later, making it one of the rarest English language titles in the console’s library.

Endearingly squat and lovingly presented, The Last Blade offers nine playable characters plucked from the original arcade game, each accompanied by beautifully drawn portraits and large, well-animated sprites. Anyone unfamiliar with the hardware shouldn’t expect broad colour palettes or detailed pixel work, but the graphical toolset has bags of personality, and, importantly, captures the essence of its arcade cousin. Whimsical in its themes of old Japan’s romantic period and encroaching westernisation, and careful in its reproduction of the arcade game’s backgrounds, stage introduction sequences and music, it’s all carried off with a bold layer of anime panache. 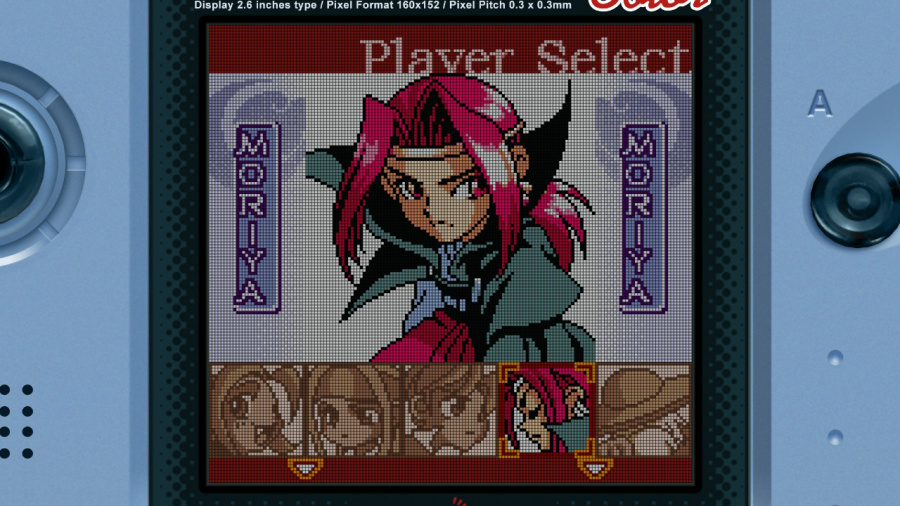 While the combat structure is marginally stripped back, it’s not by much, and this achievement is what made the Neo Geo Pocket feel so special to gamers who had one in its heyday. Being able to readily import skills learned in the arcade to a little game you could play on the train was a kind of magic. The Last Blade has just about everything: repels, juggles, hops, cross-ups, air recoveries, super moves and flashy last-ditch desperation attacks. Commandeered with just two buttons, you use short taps for light attacks and a longer press for heavier blows. It’s less tricky than it sounds, and, since the action runs markedly slower than the arcade game, you adapt fairly quickly. Both the arcade’s Power and Speed options are here, too, and with a quick code, you can unlock EX Mode, which draws elements from both Power and Speed to allow for massive combo making at the detriment of a weaker defence.

In addition to Story Mode and all of its cinematic periphery, there are training, survival and time attack modes, as well as two-player versus battles available. For those willing to put in the hours and earn currency, it’s absolutely stuffed with bonuses that can be acquired by purchasing scrolls. The five unlockable characters on the character select screen all hail from The Last Blade 2, and fundamentally change the game to the point where it becomes a full-blown amalgam of both The Last Blade 1 and 2. And, as if that wasn’t enough, you can also unlock two original mini-games: the Homerun Competition and The Great Escape from Hell’s Gate. 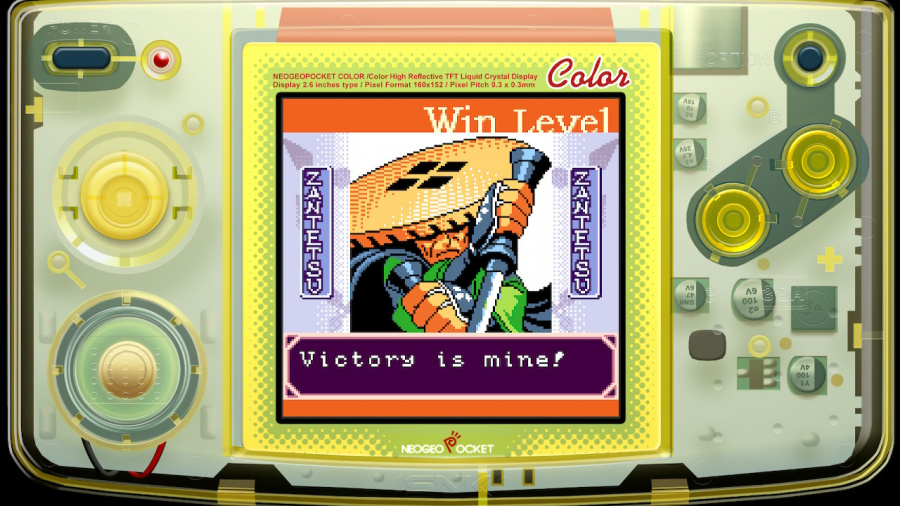 While an undeniably impressive feat of miniaturisation, sadly all of the Neo Pocket fighting games suffer from weak AI, and The Last Blade is no exception. It’s a form of Mortal Kombat-itis, in that you can spam basic jump-in combos on repeat as long as you have the correct spacing, and seven out of ten times your opponent will fail to block the opener. There are only 5 battles and a boss encounter to get through, making a single completion fairly speedy; and when you can brute force overhead kicks into standing jabs and a fireball (or similar) so regularly, it becomes even speedier. Despite being a limitation of the original hardware, it’s still slightly deflating to discover that the game’s impressive complexity is easily circumvented by simplistic fallback methods.

Additionally, the extra game configuration options are a little disappointing. You have a few seconds of being able to rewind the in-game action now, which is great if you’re a loser who can’t accept defeat, and you can choose from an entire range of original Neo Geo Pocket bezels, which is cute. But why the game doesn’t utilise the Switch’s additional buttons is a mystery.

Touch-sensitive light and hard attacks are fine when you’re restricted to two buttons, and works pretty well, but having the option to assign those attacks to the extra buttons would not only have been welcome, but would have offered a new way to experience old software. Indeed, there are occasions when the two-button limitation trips you up, as you can’t always gauge the appropriate button timing in the heat of battle. Zantetsu is a good example of where extended button assignment would have been useful, since accidentally triggering his Ninja invisibility is commonplace, and far more of a hindrance to you than it is to the AI (who doesn’t seem to notice). 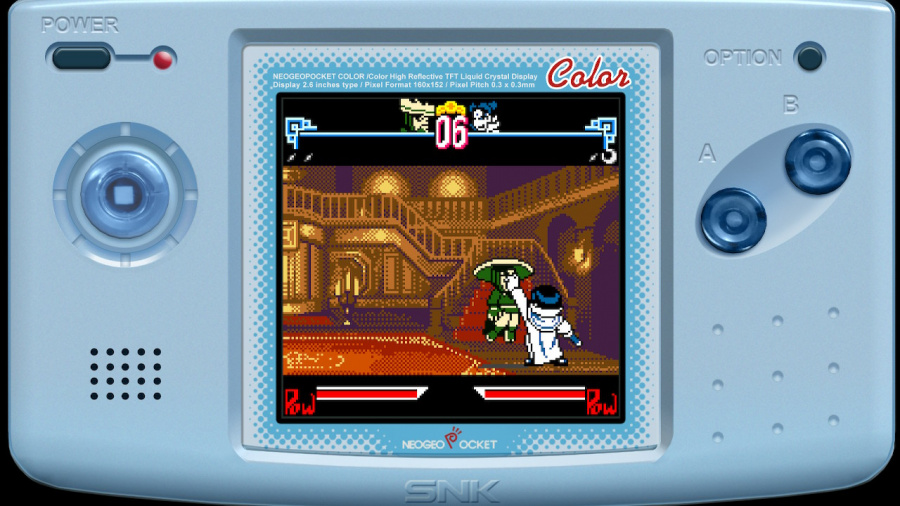 There’s only one screen filter, and it’s pretty decent when the image is made larger, capturing the look of the original hardware’s dotted TFT display, but a few more options and an opacity slider would have been welcome. The most glaring omission, however, is the lack of an on-the-fly command list. By now this should be a pre-requisite for any fighting game, new or old, yet seems to have been lazily overlooked. The only way to see your character’s attack commands is to pause and bring up scans of the game’s original manual. If you need to re-check a specific command, there’s no way to jump back to the page you were just on, forcing you to reload from the manual cover and cycle past all the (now irrelevant) console hardware stuff each time. It’s far too slow and laborious to be useful, so you will need a smartphone at the ready for quick reference.

Although The Last Blade: Beyond the Destiny is an excellent little thing, one must keep in mind that it is still a 2001 handheld fighting game, and very much of its time. On its original hardware, it was heaven-sent, but on your Switch you might be somewhat disappointed if you’re going in blind. For SNK aficionados and Last Blade fans, it will delight purely on historical value, but those with no experience of the Neo Geo Pocket or the SNK library will likely feel better served buying the actual arcade ports of Last Blade 1 and 2, which are also available on the eShop. To that end, this is a better bet for fans, collectors, and those enamoured by gaming curios. It’s dinky, it’s charming, and it’s a testament to the craftsmanship of old SNK. And, while imperfect, it plays like The Last Blade should. For certain gamers, that will be more than enough.